Our company participated for the first time in the PRO-DEFENSE Trade Fair – an event for a broadly defined Territorial Defense Forces. Our presence in Ostróda was related to promotion of batteries dedicated to any military vehicles, in particular combat ones. We presented two types of engines

The first of these were lead-acid HAWKER ARMASAFE Plus batteries by Enersys, used as starting and reserve power batteries for military vehicles, including combat ones. The Armasafe Plus series is equipped with DC batteries with a nominal voltage of 12 and C20 capacities of 42Ah, 55Ah, 75Ah, 95Ah or 120Ah. These batteries use the latest Technologies, such as: 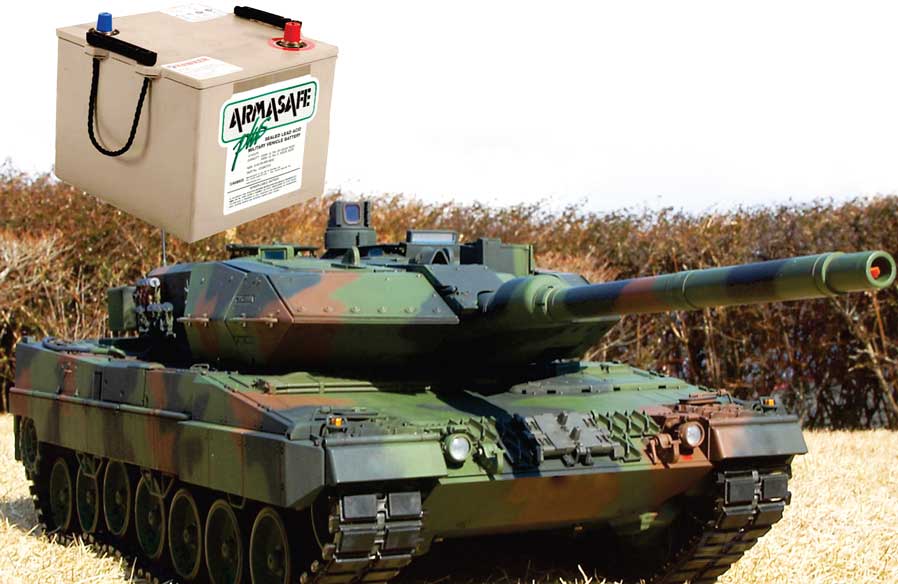 AGM (Absorber Glass Mat)
the glass fiber material is soaked in the electrolyte and plays the role of a separator between the lead plates. Due to the lack of liquid electrolyte, AGM batteries are spill-proof and can be mounted in any orientation except inverted.

TPPL (Thin Plate Pure Lead)
Unique on a European scale technology of using very thin lead plates (about 1 mm instead of 2 to 4 mm) with a very high lead purity of 99.99%. This allows for placing more plates in each cell and enables significant increase of the active surface, which results in a low internal resistance (from 1.6 mΩ - instead of 9 mΩ obtained so far), increased capacity and 2 times higher (at the same capacity) Cold Crank Amps obtained over an extended period of time.

VRLA (Valve Regulated Lead Acid)
battery with adjustable valves. This technology allows for maintenance-free operation in a long time perspective. There is no gas emission during charging and discharging batteries under normal operating conditions. These devices are characterized by the lowest self-discharge rates, long storage time without recharging (about 30 months at 20°C) and a long service life (8 to 10 years when properly maintained). These batteries are also distinguished by the highest engine starting current and the ability to start up even if the battery is discharged up to 30% of the initial capacity value. The power of these devices is 3 times bigger than other batteries with comparable capacity. Moreover, they have high shock resistance and the ability to work after shooting with a rifle.

In Poland HAWKER ARMASAFE Plus batteries are applied by many companies operating in defense industry, which manufacture, modernize and repair tactical vehicles.

The second group of batteries, which we have promoted at our stand involved devices produced by Denchi Power- the main supplier and manufacturer of lithium-ion batteries and battery chargers. A representative of this group was a well-known and broadly used small lithium-ion battery of BB2590 SMBus type (Smart - with SM bus and energy management system), which is used to supply portable electronics equipment of a soldier, or to power self-propelled robots used for various military or police purposes. Many visitors to the PRO- DEFENSE Trade Fair were interested in our solutions. There is still big demand for robust, maintenance-free, spill-proof and safe during transportation batteries. Thank you for visiting our stand at the PRO DEFENSE Trade Fair and taking the time to meet with us.