For the 11th time, as a permanent member of the AEA association, we participated in the convention that took place in sunny Palm Springs, California.

For decades, the AEA Convention has been the most important event devoted to General and Business Aviation. Nearly 2000 representatives of member companies from 43 countries - avionics manufacturers, repair stations, installers, and other general aviation companies - participated in this year's AEA Convention. 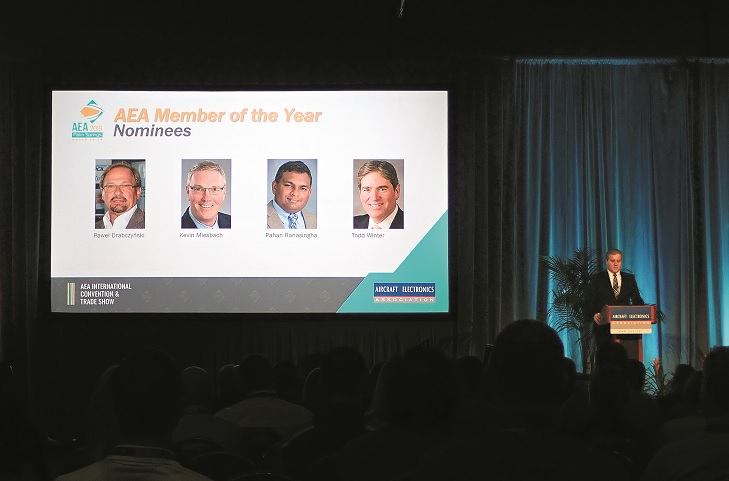 The list of nominees for this year's „Member of the Year” award was announced by the new President of AEA, Mr. Mike Adamson.

This year's edition was special for our company. For the first time, President of Drabpol – Mr. Paweł Drabczyński – was nominated for the prestigious „Member of the Year” award. This nomination is a very distinct honor in the avionics environment. It is AEA Management Board that annually decides about nominations, analyzing the achievements of the nominees and their impact on the aviation industry, both in terms of offered products and engineering solutions in the field of avionics equipment upgrades on aircraft.

2019 AEA MEMBER OF THE YEAR NOMINEES

The other nominees in this category were: Kevin Miesbach from Duncan Aviation, Pahan Ranasingha z from Avionics Installations Inc. and Todd Winter from Mid Continent Instrument and Avionics – representatives of companies that have been well known in the field of sales and service of avionics components for several or even several dozen years. This year's „AEA Member of the Year” award went to Mr. Todd Winter – the president and CEO of Mid-Continent Instruments and Avionics, with which we have been co perating since 2010. The company has been operating on the market for over 50 years, as it started its activity in 1964 as a small repair station for the growing aviation market. In 1980, it expanded the scope of itsactivity to the production of avionics and quickly gained the reputation of a professional supplier of both products and services. In 1991, Todd Winter took over the leadership of the company; at the same time, the company opened its second headquarters in California. In 2012, the company added Avionics to its name in order to better illustrate the profile of its operations, mainly for repairs of flight instruments. At present, the scope of qualifications / authorizations includes about 6000 products. 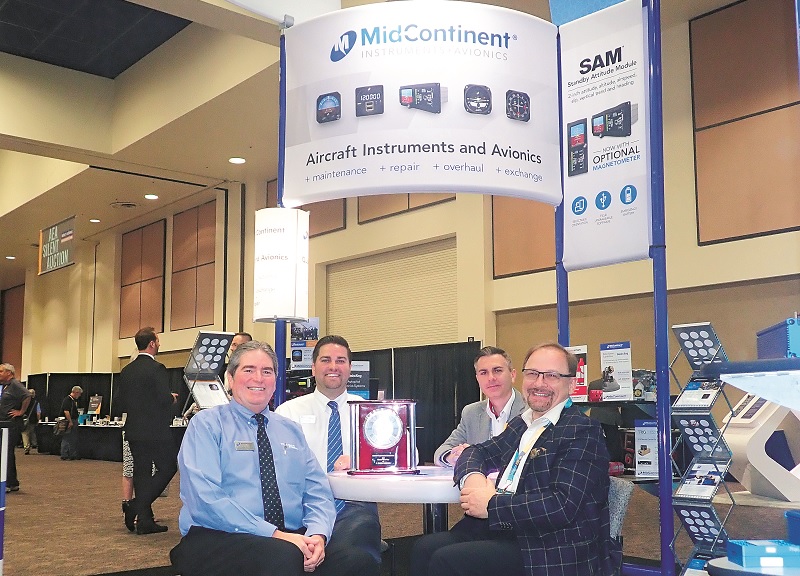 We were pleased to visit this year's winner of the „Member of the Year”, Todd Winter – the President of Mid Continent Instrument and Avionics - at the company's trade fair stand.

The 28-year activity of President Todd Winter has been appreciated by members of the AEA Committee. We cordially congratulate to the winner and all nominees. For our company, the nomination of President Paweł Drabczyński is a great reason to be proud. Finding yourself among the selected group of nomi ees and „competing” with global aviation organizations is a real accomplishment, taking into account the difference in the „aviation practice”. The official presentation of nominations and the awarding ceremony took place during the ceremonial Gala that took lace on the first day of the Convention.

At this year's AEA Convention, an official presentation of the new AEA President took place. Mr. Mike Adamson had been a member of the AEA board for many years. He was also responsible for incorporation of many improvements in the life of the Organization. Therefore, no one had the slightest doubt that he would be the right person in the right place as President Paula Derks retired. The changes also took place at the position of the Chairman of the AEA Management Board, to which Garry Joyce was appointed. Right after the official appointment, we had the pleasure of talking to the new AEA President Mike Adamson. The new AEA President gave a brief interview for readers of our quarterly. 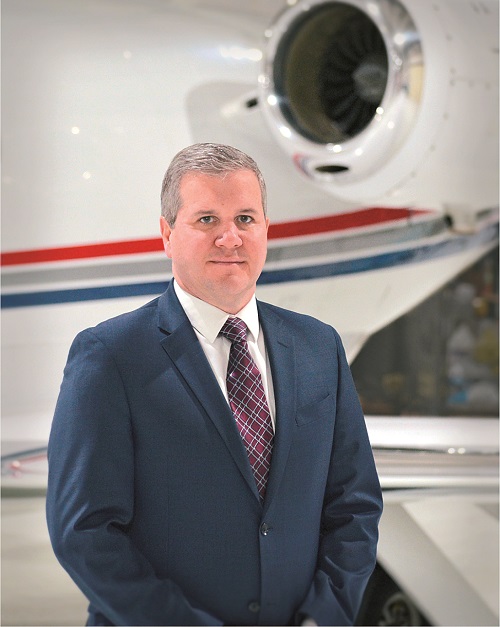 1. Can you please introduce yourself?

I have been involved in the aviation industry for over 20 years and my experience in this field includes military, commercial, business and general aviation. After completing a tour in the U.S. Navy, I earned a bachelor's degree in aviation management from Southern Illinois University and a master's degree in business administration from Avila University in Kansas City, Mo. I am an active member of several industry and academic advisory committees and I oversee, among others, AEA's training and education initiatives delivered to technicians and small-business owners throughout the world. Since joining the association in 1999, I have developed AEA's extensive offering of online, classroom and regional training courses. Before I took up the position of AEA President, I held the position of the Executive Director of the AEA Educational Foundation that administers the largest scholarship program for aircraft and avionics maintenance technicians in the world.

2.What challenges do you see for the AEA?

Our biggest challenge is recruiting the next generation of aviation professionals. From pilots to technicians this will be the focus for the foreseeable future. When you consider high tech fields, avionics is a clear standout. We should have an advantage when we recruit but we are in competition with so many other high-tech fields. Our challenge will be to find as many ways as possible to share our story with the next generation, create a pipeline of talent and facilitate ways to train technicians to be productive earlier in their employment.

3. As a new President of the AEA, do you see the need to introduce any changes?

AEA has had the right formula for 62 years. My goal is to continue our legacy of success while helping our members stay ahead of the technological advances in the cockpit and cabins of modern aircraft. The future will look different, but our mission will remain the same; enhance the probability of our members, facilitate communications, further education, encourage quality and best practices and influence the regulatory and legislative process with authorities around the world.

4. Are there any issues important for the aviation environment that require prompt regulatory action and that could be supported by the AEA?

With multiple authorities controlling aviation rulemaking around the world there is constant demand on AEA to stay on top of the issues. Almost daily we are responding to regulatory changes or guidance from these authorities. Fortunately we are well positioned with our regulatory leadership and a team of consultants to make sure AEA is responding with our members best interests in mind from a maintenance organization perspective and from an equipment manufacturer perspective.

5. How do you see the cooperation with EASA or national civil aviation authorities such as Polish ULC?

The AEA is very active with the international authorities. We maintain an office in Cologne, Germany and have regular meetings with EASA and other European authorities when appropriate. We participate with other associations in numerous rulemaking activities and we lead international harmonization efforts with the FAA when it impacts our members and their business.

Factors to be considered include regular participation at AEA events and how active the member or the company is with AEA in supporting our mission. These nominations are a very distinct honor and the individuals and companies who are considered represent the best of our industry. It was truly an honor to announce Paweł Drabczyński as an AEA Member of the Year nominee this year at our International Convention and Trade Show. I warmly congratulate on this prestigious nomination.

The AEA is an organization established to serve aviation maintenance organizations and manufacturers. If there is anything we can do to help you from a regulatory, technical, networking or business perspective please let us know. Consider attending our AEA Connect Conferences held each January at various locations throughout Europe. Please visit our website www.aea.net and read our digital edition of Avionics News magazine www.aea.net/avionicsnews to stay informed on all that AEA is working on.

Thank you very much for the interview and we wish you a lot of success!

One of the most important events for the entire AEA organization was the official farewell to the outgoing AEA President Paula Derks and handing over the reins to the incoming leader Mike Adamson. Paula Derks retired after 23 years of managing the organization, what was announced during the Las Vegas convention last year. The Association prepared a special, farewell party dedicated to Paula Derks. Everyone could personally thank to the President for decades-long service for the AEA, for the great development that AEA achieved under leadership of Paula Derks, and for everyday help and support provided to AEA members on a daily basis. It was a moving moment.

We also personally said goodbye to the outgoing President. e handed Mrs. Paula Derks a specially created album containing a lot of commemorative photos from the conferences and meetings that we jointly participated, as well as photos showing Poland's most attractive places, which may be an incentive to visit our country. The album also contained a small sur rise - a special video that will surely be a nice recollection of cooperation with our company and other members of AEA.

Although this year's Convention had its specific, unique character, we should remember that the annual symposiums also include product and service presentations of member companies, as well as a number of trainings on products or current regulations. The exhibition part of the convention gathered as many as 134 exhibitors, including our partners, with whom we have been cooperating for years. Many of them, like Bendix/King, Garmin, Universal Avionics, Avidyne, Aspen Avionics, Appareo or Mid Continent were also sponsors of this year's Convention. With great interest, we took part in selected trainings and got acquainted with the latest news on the avionics market, and there were a lot of them.

Garmin presented a new series of GPS devices – GNX 375 and GPS 175, referring to the style of known GTN in combination with the ADS-B receiver and transponder, which as far as the size is concerned corresponds to the former GPS 150/155XL devices. Certainly, the new series will be well recceived by the future users.

Bendix/King presented a new AeroVue Touch ™ at its stand – fast, simple and powerful flight display for certified aircraft. AeroVue Touch can be installed as a primary flight display or as MFD display. Another novelty was an attitude indicator with additional altitude and airspeed information – KI 300. lt can be used as a replacement for the traditional attitude indicator or as a complementary device for the AeroVue display with a standby indicator. The new Bendix/King offer was completed by the AeroPoint 200 engine monitor, that is very similar in function to the well-known JP Instruments devices and the AeroCruze 100 autopilot.

Our another partner – Honeywell - focused on presentation of Aspire® satelite communications system that provides inflight connectivity for business aviation, airlines and helicopters all over the world. Utilizing the Inmarsat satellite system, Aspire® 400 provides greater reliability, cost savings and efficiency from pole to pole. The Honeywell Aspire 400 Satellite Communications System delivers high-speed voice and data communications for cockpits and cabins in a compact and lightweight package. 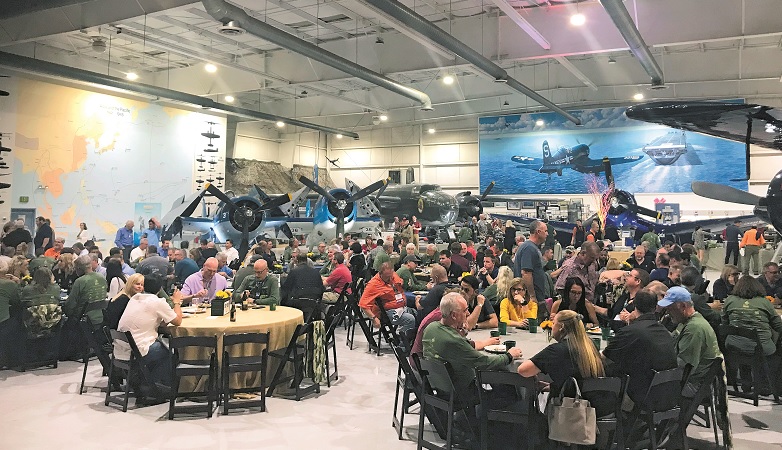 Dinner in the museum

Gala dinners organized by both AEA and avionics manufacturers for their dealers are already convention tradition. Once again, we had the pleasure to participate in such evenings. The AEA association has invited its guests to the Palm Springs Air Museum, that has one of the world's largest collection of flying combat aircraft from the World War II, many of which were built in Southern California. For those who are fans of aviation of that period, this evening was a real treat.